Where am I going?

I’ve been applying for a slew of jobs so interviews will likely (hopefully) follow. And there is one interview question that I’ve always loathed because I never knew how to answer it:

Where do you see yourself in five years?

My first thought is always “What the f*** are you talking about?”, closely followed by “How the heck should I know?”. My actual response is usually “To be honest, I don’t know. I never plan my life that far in advance. What I do know is that five years from now, I want to have gained more skills and competency in my job, enjoy what I am doing, and know that I am of value to the company”. I always worried that my response demonstrated a lack of ambition, but it the only way I can think of answering the stupid question.

Well… I have a plan. At least I think I do. Along with all the job hunting I’ve been doing, I’ve been weighing a bunch of options. At first I was overwhelmed – working from morning-to-night combing and searching for answers regarding career changing, continued education, visas, job markets, etc. For someone without a job, I’ve been pulling a lot of hours! Anyway, I think I finally have something:

It’s not a perfect plan but it’s a plan. At least I have a sense of direction – which is a far cry from where I was weeks prior.

I moved out of my apartment the last week of June. The following week I vacated my items from the cubicle I had been occupying for four years. After I leaving my job, in early July, I felt restless. Not to the point where I was losing sleep but I kept wanting to move or do something. I thought jogging would do the trick but it didn’t.

A couple of weeks later my family went down to the Caribbean for a family reunion. We landed and I kept staring at the mountain at the center of the island with this immediate incessant need to climb it. I didn’t pack the gear to do it so the next best thing to do was walk the hilly roads that snaked around and through the island.

The locals could tell I wasn’t one of them because I walked with speed and purpose; they knew they had a city girl in their midst. I’d walk and walk and walk, assured by them that it was impossible to get lost on such a small island; the road doesn’t end so you’ll always meet your destination. Except I didn’t have one. I just needed to walk it out. I’d walk from one town to another. One day I walked and walked until the road ended. The road ended. I was on top of a steep hill looking at the pavement stop sharply in front dense bush. It wasn’t a bad place to be lost – being on a hilltop overlooking a turquoise ocean – but I was tired from climbing and the sun was going down. So I sat for a few moments to catch my breath. And then I followed the same road back down the hill.

I didn’t have an epiphany in those few moments before heading back down, but there was a sense of calm as I descending down the hill. I knew I can always go back. If you know you have the possibility to return to where you came from – even if you’re not sure where you are at that moment – are you ever really truly lost?

I wonder if the reason I never made plans for my life – choosing instead to trust that life will take care of itself – was because I was afraid of failing and losing myself in the process. With this three-year plan, there is comfort in knowing that I can always go back. There is also a slightly sick exhilaration in knowing that I may fail. And if I do fail, I can do something else. I can choose my own adventure – like those books I loved when I as a kid!

Those books essentially illustrated the idea that life is about the choices we make and the subsequent path it can lead us down. Can I plan and make goals for the next three to five years? Sure. Do I know where I will be in three to five years? No, because nobody does. And that, my friends, is why that interview question is stupid.

I think I just need to walk it out a bit more. And Europe looks like a great place to do it.

Posted by unemployedcdn on August 21, 2012 in Relocation

The Curriculum Vitae: Not Beating Around the Bush, eh?

So it appears that when applying for jobs in Germany (and Europe in general), job applicants are expected to provide a curriculum vitae (better known as a CV). It’s like a resume, but different. In Germany, it’s called a lebenslauf.

It shouldn’t be a big deal but… it kind of is.

The biggest difference between a resume and a CV is that the latter requires the applicant to include a picture and personal information – and when I say personal, I mean information that would be illegal for a hiring employer to illicit during the recruitment process in Canada: age, sex/gender, marital/family status, citizenship, etc. I’ve even seen samples of the CV where the applicant lists the names of their children.

So… I’ve drafted a CV but I can’t help but wonder what bearing these insights into my personal life would have on me getting/not getting the position. Will my photo work in my favour, or against me? Will they see that I’m childless and think “Oh good, so she won’t mind working lots of overtime”?

Having said that, at least they’re not beating around the bush. They are admitting to having a discriminatory eye upfront rather than trying to pry the same kind of insights by asking roundabout questions during the interview process. If the German employer is not looking for someone like me then at least they’re not wasting both of our time going through the niceties of an interview that would go nowhere.

If anything, it’s not like one cannot pass judgement on resumes lacking personal details. If someone earned their high school diploma in 1992, does this not help imply (infer?) someone’s age? If someone has been employed and educated in Warsaw, is there not a big possibility that he/she is not a Canadian citizen?

I borrowed a book from the library: Unbeatable Resumes, by Tony Beshara. The book is okay; it has some good tips. I was somewhat disappointed though when I came upon this section addressing – what I’d like to call – textually-apparent minorities:

“If your name makes it obvious that you are of a member of a minority group or are foreign born, you may want to consider changing it for resume purposes only. Now, you probably will respond with horror: “Well, that’s discrimination! People shouldn’t decide on interviewing me based on my name.” You’re absolutely right! It is discrimination. All hiring is discriminatory. Some of it is legal, and some of it isn’t. But remember that you are trying to get job interviews, not change the world. If you’re uncomfortable doing this, don’t do it.”

I’ve seen coworkers disregard resumes that have crossed their desks based on the applicant’s name because it was “funny” looking, or took it to mean that the applicant couldn’t possibly be fluent in English – or that even if they were fluent, our customers/clients wouldn’t be able to get past their (assumed) foreign accent. 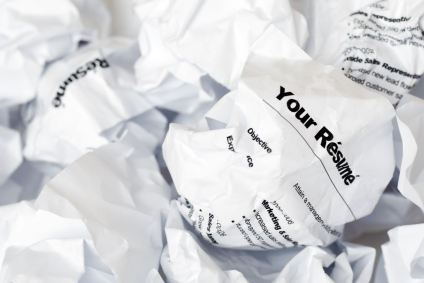 On the flip side, there is the instance when your English/Christian name awards you an interview – only to arrive for the interview and be informed that “the job has been taken” because they weren’t expecting you, racially speaking.

According to Beshara, “All hiring is discriminatory”. This is true. If it wasn’t, recruiters would place all resumes in a … big hat, close their eyes, and draw one from the bunch. The degree of discriminatory practices may vary, but it will happen: if not based on your resume, or CV, then based on your interview. It’s inevitable.

So is my hesitation of submitting a CV a reflection of the discriminatory practice or my assumptions/paranoia regarding the practice? In other words, is this anxiety about the curriculum vitae? Or is it about how I see myself in the eyes of others?

One thing is for sure: I am overanalyzing the s**t out of this.

Posted by unemployedcdn on August 8, 2012 in Applying for Jobs